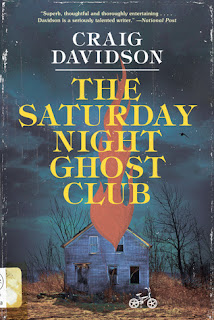 The Saturday Night Ghost Club by Craig Davidson
surprised me; it turned out to be more than what I expected.


from description:  A short, irresistible, and bittersweet coming-of-age story in the vein of Stranger Things and Stand by Me about a group of misfit kids who spend an unforgettable summer investigating local ghost stories and urban legendsGrowing up in 1980s Niagara Falls - a seedy but magical, slightly haunted place - Jake Baker spends most of his time with his uncle Calvin, a kind but eccentric enthusiast of occult artifacts and conspiracy theories. The summer Jake turns twelve, he befriends a pair of siblings new to town, and so Calvin decides to initiate them all into the "Saturday Night Ghost Club." But as the summer goes on, what begins as a seemingly light-hearted project may ultimately uncover more than any of its members had imagined. With the alternating warmth and sadness of the best coming-of-age stories, The Saturday Night Ghost Club is a note-perfect novel that poignantly examines the haunting mutability of memory and storytelling, as well as the experiences that form the people we become, and establishes Craig Davidson as a remarkable literary talent.

When the novel began with the observations of a brain surgeon, I was a bit taken aback.  The narrative is about misfit kids and an unforgettable summer, but there is also an acutely philosophical theme of memory and its vagaries.  The adult Jake moves from his current career as a neurosurgeon to his memories of the summer when he was twelve--his family, his friends, and his understanding of events in the past.