The Bastard Brigade by Sam Keane 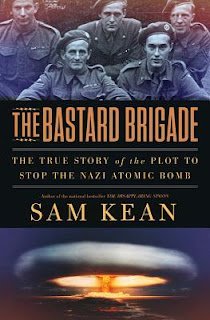 The Bastard Brigade: The True Story of the Plot to Stop the Nazi Atomic Bomb  was a surprise in a number of ways. In spite of my interest in WWII, I wasn't sure if this one would be a winner for me.  There is some physics involved, which made me a bit leery, but Sam Kean keeps it simple even for the layman, and the oddball (and totally real) characters involved are fascinating examples of all the strengths and flaws human beings can exhibit.

from description:  From New York Times bestselling author Sam Kean comes the gripping, untold story of a renegade group of scientists and spies determined to keep Adolf Hitler from obtaining the ultimate prize: a nuclear bomb.

Some of the information was already familiar to me because I've read a lot of WWII nonfiction, but not in the same detail.

I knew about the attempts to sabotage the Venmorck Heavy Water facility in Norway to prevent the Germans from gaining access to heavy water for nuclear experiments, but not how many on died on the original British attempt or any details about Operation Grouse and the unbelievable hardships of the Norwegian team.

I knew about Marie Curie, but not that she was asked not to attend the ceremony for her second Nobel Prize for moral reasons--because after the death of her husband, she was having an affair with a married scientist.  She attended anyway.

And I had no idea about her daughter Irene Joliot-Curie and her husband Frederick Joliot-Curie's experiments, their connection to heavy water, and Frederick's work with the Resistance.

I knew about Moe Berg, the baseball catcher turned spy, but not about the details of his career and that during baseball's off seasons, he attended the Sorbonne and graduated from Princeton and Columbia Law School.  Casey Stengel called him "the strangest man ever to play baseball."

I knew almost nothing about the scientists involved other than the most famous names, but all of these men and women came alive as real people, not just historical footnotes.

Although I had some quibbles about the author insertions in parentheticals or italics, the book was easy to read, fascinating, and informative.  Many missions failed or missed, and the book doesn't present any of these individuals as comic book heroes or paragons, many of them had no background in clandestine activities and were eccentric in one way or another, but each one played a vital role in helping prevent Germany achieving nuclear power.

Read in May.  Blog review scheduled for June 23.