Thief of Souls by Brian Klingborg 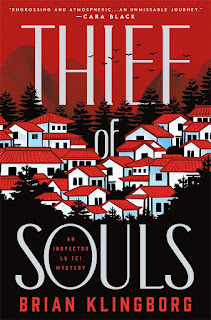 Thief of Souls is a police procedural set in a small Chinese village and the first in a new series by Brian Klingborg.  This is the first time I've read anything by Klingborg, so here is a little background from Amazon's author page:   "Brian Klingborg is a graduate of Harvard's Regional Studies East Asia program, and spent many years living and working in Asia and Europe. In addition to his first novel, Kill Devil Falls, published in 2017, he's written widely on Chinese martial arts."

When reading a book set in another culture, it is nice to know the author has some first hand knowledge and familiarity with his subject.

From Description:  "Lu Fei is a graduate of China's top police college but he's been assigned to a sleepy backwater town in northern China, where almost nothing happens and the theft of a few chickens represents a major crime wave. That is until a young woman is found dead, her organs removed, and joss paper stuffed in her mouth. The CID in Beijing--headed by a rising political star--is on the case but in an increasingly authoritarian China, prosperity and political stability are far more important than solving the murder of an insignificant village girl. As such, the CID head is interested in pinning the crime on the first available suspect rather than wading into uncomfortable truths, leaving Lu Fei on his own."

Lu Fei is an interesting character: a little lonely, not entirely unsatisfied with his backwater assignment, determined to do his best.  When a superior wants an arrest quickly, Lu Fei must continue the investigation on his own, not only to solve the murder, but to prevent an innocent man from being convicted.

As it turns out, the young woman's death and the method is part of a pattern, and Lu Fei finds himself on the trail of a serial killer.

The plot is interesting on its own, but the connection with the Chinese bureaucracy and culture added to my appreciation of the novel.