Jane Whitefield Series (books 2 and 3) by Thomas Perry: Fly with the Arrow by Sarah Wilson

Dance for the Dead is the second book in the Jane Whitefield series.  I dived into it shortly after reading the first book.

Timothy Decker is eight-years-old and someone wants him dead.  The people who care about him are dying at a rapid rate when Jane Whitefield steps in to help him disappear.

At the same time, Jane is trying to help Mary Perkins escape a predator who knows about Mary's S&L fraud and wants her money, after which she will be disposable.

I enjoyed this one, too, and I went directly into the next book.

Shadow Woman has a different twist because Jane decides to marry her Carey McKinnon and give up her life as a guide who helps people disappear.  But Jane feels compelled to help Peter Hatcher again because she had to rush his relocation, and he is once again in danger.  She intends this to be her last case.

Another twisty action-filled book with a pair of married killers who have been hired to find and kill Peter.

I thoroughly enjoyed the first book, but this may not be the best series for binge reading as the plots are basically the same, although with new characters on the run and new villains pursuing them.

If I didn't already know that the series continues, I might have wondered if Shadow Woman was supposed to conclude a trilogy.

The suspense and adventure are satisfying, and these books kept me involved, providing an escape from depressing national, state, and local news.  However, I think I'll give the series a pause for a month or so--not abandon it, just enough of a rest that I can appreciate the suspense again. 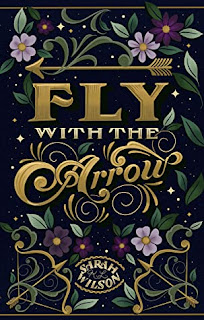 Sarah Wilson's Fly with the Arrow (Bluebeard's Secret #1) was a great take-off on the Bluebeard tale.  It was fun, original, the cover is gorgeous.

My only complaint is that it ended in a cliff-hanger.  But I was willing to forgive that and pre-ordered the next book: Dance with the Sword.

Unfortunately, I didn't enjoy the second book as much AND it ended with another cliff-hanger.  As much as I enjoyed the first book, Dance with the Sword failed to have the same effect.