What Can't Be Seen by Brianna LaBuskes (Gretchen White #2), One for Sorrow by Helen Fields, and Everything You Wanted to Know About Indians but Were Afraid to Ask by Anton Truer

When I read A Familiar Sight, I was fascinated and found it compulsive reading while at the same time, having a lot of questions.  The character of Gretchen White, acknowledged sociopath and a psychologist and consultant for the Boston PD, is seductive and disquieting.  I knew I'd want to read the next book. 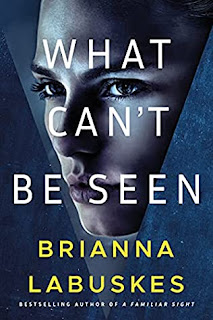 What Can't Be Seen has Detective Lauren Marconi persuading Gretchen to look at her own case.  This, Gretchen has never been willing to do.  Did Gretchen really kill her Aunt Rowan when Gretchen was eight years old?  Marconi wants Gretchen to use her skills as a psychologist and criminologist discover what really happened that night--because Marconi doesn't believe Gretchen is guilty.  Gretchen, however, believes she is guilty and has done her best to avoid examining her own case as a result.

Looking into her own case threatens Gretchen's tight control of her own dark impulses.  A brilliant woman, she has done her best to prove herself in the world, knowing that her world view is that of a sociopath and that her abilities are always impaired by her lack of emotional empathy.

Detective Shaughnessy believes she got away with murder when she was a child, and Gretchen has used him as a kind of guidepost to controlling her impulses.  She is determined not to let her impulses prove Shaughnessy right in his opinion.  The two of have worked together on many cases that Gretchen has solved, but he still waits for her to screw up.

Eventually, Gretchen and Marconi come to an arrangement, and the two begin investigating the thirty year old case.  The book moves from present to past and back again and is told from differing perspectives in a complex plot that kept me guessing.

The first book had me completely engrossed (despite all my questions), and What Can't Be Seen is even better.  I want more of Gretchen White and Detective Lauren Marconi. 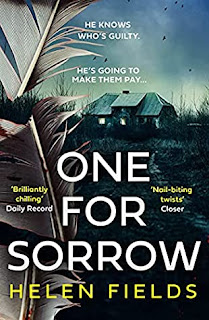 Helen Field's DI Luc Callenach and DCI Ava Turner series keeps up dramatic suspense in the latest installment.  While it is interesting to begin the series with the first book, each can be read as a stand-alone.

In addition to her main characters, Field has a great cast of secondary characters, and it is always nice to catch up with them.  Edinburgh also functions as both setting and character.

One for Sorrow is compelling and fast-paced as a lone bomber creates chaos in Edinburgh.  Luc and Ava are at a loss as to motive, but the deaths are devastating.  The bomber targets police and ambulance workers, those who are there to help--adding another degree of horror to the chaos being inflicted.

The bomber gives the police tips and leads them into traps, and even after they know what to expect, they have no choice but to respond.

Two timelines, twisty, dark, and engrossing, the book gets your adrenaline going. 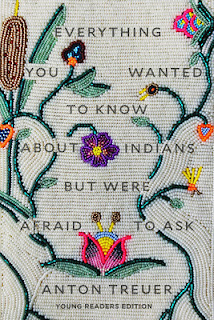 from description: From the acclaimed Ojibwe author and professor Anton Treuer comes an essential book of questions and answers for Native and non-Native young readers alike. Ranging from "Why is there such a fuss about nonnative people wearing Indian costumes for Halloween?" to "Why is it called a 'traditional Indian fry bread taco'?" to "What's it like for natives who don't look native?" to "Why are Indians so often imagined rather than understood?", and beyond, Everything You Wanted to Know About Indians But Were Afraid to Ask (Young Readers Edition) does exactly what its title says for young readers, in a style consistently thoughtful, personal, and engaging.

The questions in the above blurb indicate only a small portion of the content, and the answers to these and many other questions are both thoughtful and thought-provoking.

Anton Truer, an Ojibwe, grew up the Leech Lake Reservation in Minnesota.  I mentioned it on my other blog in December and am copying and pasting the following: The format is question and answer, and includes history, culture, language, stereotypes, racism, sovereignty, and much more.  Truer approaches each subject in a non-confrontational manner.   It is not, as you may imagine, a pretty picture, but it is fascinating.

Although targeted at young adults, it does not condescend in any way in language or ideas.  The book and Truer's comments provide absorbing views of history, stereotypes, the treatment of "the other," government policies, languages, and cultural values that may make you reconsider what you think you knew about Indians.  Truer concedes that his views are not universal among all the tribes, even on the the term Indian.  He self-references as Indian because that is what he grew up with.
I read about this one on Deb's Reader Buzz blog during Nonfiction November, and it was one of my early December books.   I join others in saying all libraries should have copies of Everything You Wanted to Know About Indians, but Were Afraid to Ask.
Audiobook.
I won't be reviewing all the books read in December, but I'm making an effort to catch up on many of them!
Posted by jenclair at 7:00 AM