Finally Caught Up on Reviews!

I finally finished the last review of finished books and feel that a load has been lifted.

I've been busy lately and have done less reading (and have been procrastinating on reviews), but The Zookeeper's Wife is keeping me interested. Ever since reading Mila 18 years ago, anything to do with the Warsaw Ghetto has fascinated me. More images and information here. The Nazis planned to eliminate not only the Jews, but the Poles as well, and the living conditions were terrible and terrifying. Jan Zabinski was a member of Zegota, the Council for Aid to the Jews and part of the underground resistance. Jan was recognized as one of The Righteous Among Nations for the efforts he and Antonina made in hiding Jews in their home and the cages of the zoo during the occupation of Poland. More about The Righteous Among Nations. Ackerman's book, however, focuses more on Antonina and her lower key, but just as necessary, efforts in hiding and caring for the Jews who were Guests in her home and the zoo grounds.

On a lighter, note: As I mentioned in an earlier post, I don't care for oysters...and yet, have enjoyed some of the chapters in M.F.K. Fisher's Consider the Oyster. "Soup of the Evening, Beautiful Soup" is a chapter devoted almost entirely to recipes for oyster soup/bisque and to Fisher's opinion of said recipes. The first recipe is from a newspaper, and Fisher calls it, "almost actively abhorrent." Without mincing words, Fisher says of that particular essay, "It represents with its efficiency, its lack of imagination, its very practicability, everything that Brillat-Savarin, in his forthright manner would have belched at gastronomically." She does go on to say, however, "And yet it can be a good soup" because it allows for individual variations which she lists and concludes with "this sterile recipe can do small harm." From this "abhorrent" version of oyster soup, the author proceeds to the ones she finds interesting or especially tasty.

Oh, the attraction this volunteer lantana has had for butterflies this year! It has been covered this month with Monarchs, Viceroys, Swallowtails, and various smaller butterflies. 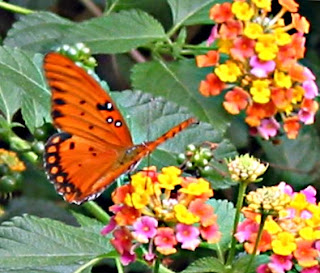