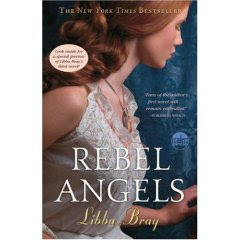 Bray, Libba. Rebel Angels. I enjoyed the first book in this series much more than this one. Gemma has lost much of her independence, individuality, and quirky humor. The feisty and funny character at the beginning of A Great and Terrible Beauty is now too easily swayed by her friends.

Gemma, Felicity, and Ann take their Christmas holidays in London, but as things are not going well in the realms, they make frequent visits there. Gemma finds Pippa disturbing, but she is the only one who sees a problem (makes one wonder about Felicity and Ann, who appear undaunted by the deterioration in both Pippa and the realms), but Gemma does little to explain her doubts to the girls--maybe because she knows it its hopeless. Kartik plays a bigger part in this book (a good thing) and seems to be set up to play an even larger role in the next one. There is a bit of "romance" with Simon Middleton, but it is a sideline because Gemma must keep Circe from gaining control in the realms. Who is Circe? In order to fight her, Gemma must determine Circe's identity.

The anagrams may fool the twelve-year-old audience, but I'd think that by thirteen or fourteen most girls would catch on to this twist. Gemma's response to Simon's behavior at the party seems particularly obtuse, and her tendency to allow her friends to browbeat her-- seems at odds with "Lady Hope" and the idea that she is heir to magical powers beyond those of any previous member of The Order. I hope that in the third novel, Gemma comes into her own again.