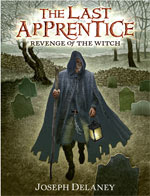 Delaney, Joseph. The Last Apprentice: Revenge of the Witch. A YA book for ages 10 and up, according to the jacket. This YA novel doesn't patronize young readers, and I like that. Thomas Ward is the seventh son of a seventh son, and since his eldest brother will be inheriting the family farm, young Tom must be apprenticed elsewhere. His mother has made plans for this: Tom will be apprenticed to Old Gregory, the county Spook. The Spook is responsible for binding boggarts, capturing witches, and taking care of any evil that appears in the county.

Twelve-year-old Tom must learn the trade in order to take over the position from Old Gregory because a Spook is necessary for the safety of the county's residents; but... there have been 29 previous apprentices who were not successful. Will Tom, with the inchoate magic of the 7th son of a 7th son, be able to succeed where the others failed?

The trials and tribulations of Tom as a new apprentice are many. He has notes to take, spells to learn, and chores to perform, and then-- he meets Alice of the pointy shoes and becomes entangled in a dangerous mission that could end very badly, indeed.

I think young people would love the book for all the deliciously frightening events and for the magical education Tom is receiving.

The next in the series is The Last Apprentice: The Curse of the Bane.