Baltimore, or The Steadfast Tin Soldier and the Vampire 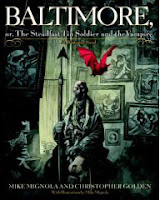 Mignola, Mike, and Christopher Golden. Baltimore, or, the Steadfast Tin Soldier and the Vampire. I really did not know what to expect with this book; I saw it on the new book shelf at the library and remembered that it was on Carl's list of favorite books for 2007.

The first chapter shifts back and forth between the Ardennes Forest, a bloody battleground in two World Wars (but apparently set in WWI) and the story of a tin soldier belonging to a young boy. I say apparently WWI because eventually some notable differences occur. The story of the tin soldier, while containing elements of the Hans Christian Andersen story, is also part of Sir Henry Baltimore's memories of childhood and the hallucinations resulting from a severe wound and a terrible supernatural event .

From the beginning, I was impressed with the writing and thought immediately of All Quiet on the Western Front. Then there was a drastic shift from the horrors of the war as Lord Baltimore confronts an even greater horror -- one that was beyond his imagination.

The story then shifts to several years later and an inn where three men meet: three men who have been summoned by Lord Baltimore to this time and place. Each of the men have known Baltimore, each has had a direct contact with evil, and each will join Baltimore in a terrible and crucial battle. Here the elements of Dracula, the classic vampire story begin to emerge. As with The Steadfast Tin Soldier, it is not an exact fit, but a careful lifting of certain components and an adapting of those components to the tale Mignola and Golden want to tell.

I've read three excellent modern versions of the vampire story based on Bram Stoker's novel: The Historian by Elizabeth Kostova, Renfield: Slave of Dracula by Barbara Hambly (recommended by Chris), and Baltimore by Mignola and Golden. Baltimore differs from the other two in several ways, but is ultimately the one with the greatest sense of malevolence. It leaves one gory battlefield in Ardennes and advances to another battlefield, one of the soul and the spirit, as a plague devastates the land. Allegorical and drawing on the Dracula/vampire legend, WWI and the flu epidemic of 1919, and Hans Christian Anderson's fairy tale, Mignola and Golden and have rendered a beautifully crafted, but chilling literary analogue complete with equally well-crafted and chilling illustrations.

Anyone interested in vampire stories should definitely add this to their list. Although, like Carl, I found the ending less than completely satisfactory, the book itself should be considered a must read for those who love Dracula, The Historian, and/or Renfield.