Returned from Savannah Sunday afternoon. Wonderful trip! Such a beautiful and fascinating city. Here is the kitchen where we ate breakfast with the fire in the fireplace. 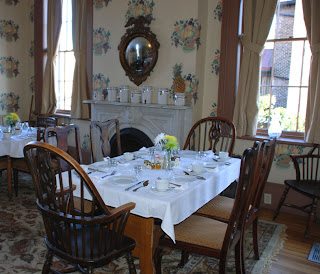 One of the gardens at the Gastonian Inn where we stayed. 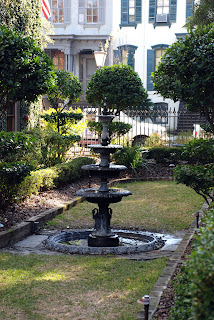 I liked this door, but didn't go up stairs to see if Mr. Marlowe was in. 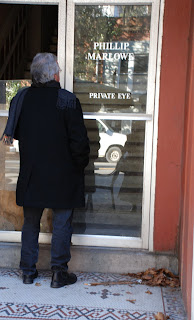 Yesterday and today, I've been keeping Bryce so Amelia could get back to work to catch up on a few things. She and Bryce will be staying home tomorrow. I've been so lucky with both of my children and all 3 grandchildren. Good babies all. Feed, change, and admire them -- almost all that is required. 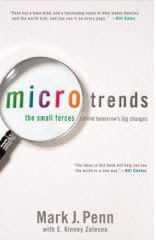 While in Savannah, I found that Microtrends: The Small Forces Behind Tomorrow's Big Changes was a great conversation aid. I'd started the book (an ARC from Anna that has been neglected for a long time) before leaving, but didn't take it with me because it is a 400 page hardback. Marc Penn is the pollster who spotted the importance and named the political force of the "Soccer Moms" in 1996. There were several conversations (with Fee and with people we met at the Gastonian or found ourselves talking to on a tour) that echoed things I'd just read: in 2005, single women were the second-largest group of home-buyers and women are investing and retiring alone (and the implications of this trend), commuter couples, and the working retired. The working retired trend has huge implications: politically and economically (for example, Penn notes that men & women who continue working after age 65 could help avert the Social Security crisis.

I have finished two books: Dedication by Emma McLaughlin and Nicola Krause. and Forgive Me by Amanda Eyre Ward. Will review them soon. I'm over half way through The Winter Rose by Jennifer Donnelly which was waiting for me when we returned from Savannah on Sunday. I have not read The Tea Rose which has several of the same characters, but I'm enjoying this one.

Gave in and bought a cookbook while in Savannah and read it through several times on the plane and in the airport on Sunday. Mmmm...some really good recipes.
Posted by jenclair at 1:19 AM