Aggie is a village girl who takes a job as companion to the rich ward of the local Master and must go to Murkmere to live.  She is so impressed by the grand old mansion, that she doesn't initially notice its state of disrepair.  The Master is kind, but crippled, and heavily influenced by his steward.  He also carries a deep grief over the loss of his young wife, from which he has never recovered.

Leah, the petulant ward, doesn't want Aggie there and escapes from her presence when she can.  When she must endure Aggie, her tongue is sharp and sarcastic.  It is particularly hurtful when Leah makes fun of Aggie's religious beliefs, calling them superstitious.

Eventually, the two girls manage a better relationship, and Aggie comes to believe that her "religion" is not only superstition, but a superstition imposed by the government to keep the populace under control.  Aggie has access to books that the Protectorate had forbidden through Leah, and the girls' friendship advances until....

The novel is a kind of dystopian novel, in that some great change has resulted in a devolution of science and industrial advancement, but set in a quasi-Victorian setting.  I really liked the change-up of the Selkie myth and look forward to the next novel in the series, Ambergate. 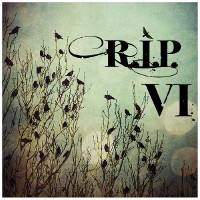 This one is for Carl's R.I.P Challenge.