Ashes of the Earth by Eliot Pattison 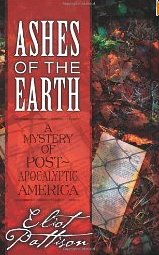 Ashes of the Earth is a dystopian novel.  I'm going to make this a short review for two reasons:  I read it over a month ago, and I was disappointed in it.

I've read three of  Pattison's political thrillers about Tibet.  I loved each one.  They were complex and educational and exciting and full of adventure in the Tibetan mountains.  The novels are about a former Chinese investigator who looked too closely at situations he should have overlooked and ends up exiled to a "gulag" in Tibet.  As a prisoner, he becomes influenced by the Buddhists Monks who are his fellow prisoners and also condemned to forced labor.  The Skull Mantra begins the series, and I loved each of the three books in this series that I have read.


For this novel, however, I'm going to resort to a canned review from Publisher's Weekly:


Having successfully portrayed both modern-day Tibet and Colonial America in two series, Edgar-winner Pattison (Eye of the Raven) launches a third with this brilliant if grim mystery set in the 21st century 25 years after global mega-acts of terror have destroyed all U.S. government entities and almost all infrastructure. Hadrian Boone, one of the cofounders of the struggling colony of Carthage, located near the Great Lakes, is one of those who remembers the former world, as the time before the apocalypse is referred to, but he's on the outs with the community's leaders and on the verge of being exiled. The chance discovery of a body triggers a series of events that reintroduces murder and other crimes to a community reliant on 19th-century technology. Boone's efforts to find the truth and what it implies for Carthage's future put him in harm's way time after time. Pattison blends the bleakness of The Road with a well-crafted whodunit plot for another winner.


I didn't really like the feel of the novel and found the protagonist Hadrian Boone too difficult to believe in.


On the other hand, I'm reminded of how much I admired the Tibetan series.  These novels are long and involved, complex, frightening, thrilling...and show the horrors inflicted on Tibet as the Chinese try to eradicate the Tibetan culture.


Other opinions:  King of the Nerds, Mystery Maven Blog, --these and other reviews I found are all positive.  I'm odd-man-out.