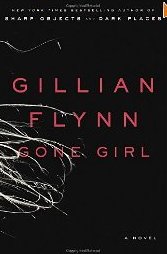 I was late to the party with Gone Girl; it seems as if everyone has read this one.  The title appeared over and over again on everyone's list, but I didn't decide to read it until Amelia started talking about it.

It didn't take long to see what all the hype was about-- Gone Girl is an intense read and surely one of the best suspense novels in a long time.

When Nick's wife Amy disappears on their fifth anniversary, Nick is as puzzled as everyone else.  Is Amy a runaway, is she dead, did Nick kill her?  Flynn presents two versions of the marriage--one through Nick's eyes and one through Amy's diary.  But talk about unreliable narrators!   As details of the marriage are revealed, the versions both match and diverge, not so much in events, but in the presentation, in the deciphering, of the events.

With the accumulation of information, the reader becomes more and more uncertain as to whose account of the relationship is the truth, but one thing is clear, the marriage is full of poisonous, subversive elements.  Whose version to believe?

There are lot of things I'd like to mention and discuss, but the success of the novel is largely in the gradual absorption of information and the interpretation of events.  Flynn releases this bit of information and this seemingly contradictory bit, and the reader's opinion changes, and changes again.