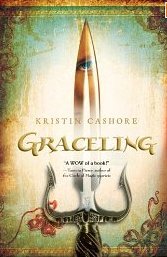 Graceling is a YA fantasy by Kristin Cashore.

From Library Journal:  "In this debut fantasy novel, Cashore treats readers to compelling and eminently likable characters and a story that draws them in from the first paragraph. In Katsa's world, the "Graced," those gifted in a particular way, are marked by eyes that are different colors. Katsa's Grace is that she is a gifted fighter, and, as such, she is virtually invincible. She is in the service of her tyrannical uncle, king of one of the seven kingdoms, and she is forced to torture people for infractions against him. She has secretly formed the Council, which acts in the service of justice and fairness for those who have been accused and abused."

I enjoyed this YA fantasy, but was a bit disappointed to disover that the other books in the "series" do not continue the story of Kat and Po. 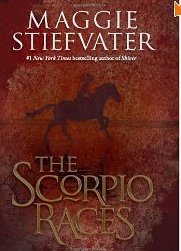 The Scorpio Races by Maggie Stiefvater is another YA fantasy.  I loved The Raven Boys (an ebook ARC from Net Galley), and wanted to try something else by Stiefvater, so I ordered this one for my Kindle.

The water horses, capaill uisce, of the small island of Thisby are carnivores--beautiful and terrifying.  The annual Scorpio Races, held each November, are thrilling and often deadly, but the ancient tradition continues to be practiced regardless of the risks.

Puck Connelly's parents were killed by a capaill uisce, (you didn't have to be involved with the races to be killed by the water horses) and she and her brothers have difficulties making ends meet.  This year's race might present an opportunity for Puck to keep her home and to prevent her brother Gabe from leaving the island.

Sean Kendrick, a stoic young veteran of the races, works as a trainer for the largest stable on the island.  With several wins under his belt, he sees this year's race as an opportunity to own his beloved water horse, Corr.

Both young people have huge investments in the November race, and they move from active dislike to an uneasy friendship as they prepare for the race.

Character development and atmosphere are so well done that the reader feels present on the island, and while the plot development is slow, it is not plodding.  I liked the fact that Stiefvater took an old myth and altered it to fit the story she wanted to tell, but although there were many elements I admired, I liked The Raven Boys much better.