The Last Runaway by Tracy Chavalier 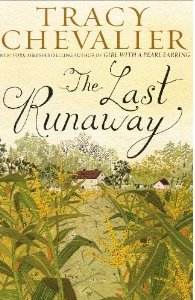 The Last Runaway is an ARC from Dutton; publication date - Jan. 8, 2013.  This is Chevalier's first novel set in the United States and details the life of Honor Bright, a young Quaker woman who travels to America in 1850 with her sister Grace, who is to marry a young man from their English village.

On their way to Ohio, however, Grace Bright contracts yellow fever and dies.  Suddenly, Honor's position in the world is even less secure and very uncomfortable as she becomes a resented burden on the man Grace was to marry and his unpleasant sister-in-law.

Fortunately, Honor has developed a friendship with Belle, who shelters runaways as a stop on the Underground Railroad and gives Honor her personal support whenever she can.  Interesting that the Quakers are reluctant to get involved, and Belle, who is not a Quaker, devotes herself to the cause.  As Honor finds herself drawn into a life very different from her previous one in England, unsettled by the rough ways of the Ohio pioneers, lonely, and always an outsider, she must decide whether or not to act on her principles when doing so can cost so much.

I enjoyed the book, although I liked Remarkable Creatures better.  There was a great deal of information about the Ohio settlements, the hardships of immigrants, and the difficulties and consequences of opposing the Fugitive Slave Act and helping runaway slaves on their journeys to escape.

The importance of quilting among settlers, the differences in styles on the frontier and what Honor had been accustomed to in England, and Honor's pleasure in her stitches appealed to me (even if I've done very little for a while).

Chevalier doesn't take the easy route with Honor's life; she doesn't romanticize the situations or the relationships.  Honor must find her place in a new world, and finding that place isn't easy physically or emotionally.

Nice reading list about the Underground Railroad, Quakers, quilting in Ohio, etc. is included in the acknowledgements.

My thanks to Amanda Walker (Dutton & the Penguin Group) for sending this one.