Practice to Deceive by Ann Rule 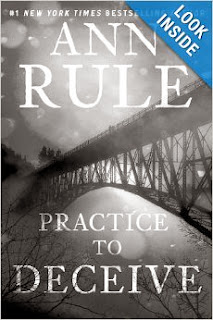 Practice to Deceive relates the circumstances of a murder on Whidbey Island in Puget Sound in 2003.  Ann Rule is known for her true crime books, but this is the only one I've read.

Russel Douglas was found the day after Christmas, and what initially looked like a suicide, a single gun shot to the head, was determined to be murder when no gun was found.  It took years of dedicated police work to solve this case, but strangely, the book is not really interesting.

There are too many people and too many digressions from the actual case.  Rule includes everyone the police interviewed, and there were dozens.

The chronological order kept shifting; sometimes it was difficult to understand exactly when an event occurred.

The lengthy descriptions of everyone involved and all of their family members and who they married and their children and grandchildren were unnecessary (especially since almost everyone had been married two or three or more times).  And there were plenty of repetitions of easy to remember facts while including all of the pointless information.

If the book had cut to the chase and maintained focus, it would have been half , maybe even one third of the length.

True crime books like In Cold Blood and Helter Skelter are horrifying, but fascinating.  In Practice to Deceive, not the murder, not  the individuals involved, and not the narrative manage to be truly interesting.