All the Murmuring Bones by A.G. Slatter 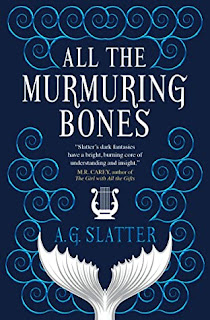 "Angela Slatter is the author of the supernatural crime novels from Jo Fletcher Books/Hachette International: Vigil (2016), Corpselight (2017) and Restoration (2018), as well as eight short story collections...

From Description:  "Long ago Miren O'Malley's family prospered due to a deal struck with the Mer: safety for their ships in return for a child of each generation. But for many years the family have been unable to keep their side of the bargain and have fallen into decline. Miren's grandmother is determined to restore their glory, even at the price of Miren's freedom.

A spellbinding tale of dark family secrets, magic and witches, and creatures of myth and the sea...."
---
This is the first book I've read by Angela Slatter.  All the Murmuring Bones is a mixture of dark Gothic and mythic elements with a protagonist who wants to escape the strange O'Malley family and become her own person.  The writing is lush and atmospheric, and the story doesn't really begin until chapter two.  The first chapter is a beautifully written history of the sinister O'Malley family.

Miren, abandoned by her parents when she was a child, was raised by her grandparents.  After her grandfather's death, her grandmother Aoife O'Malley prepares to use her granddaughter in keeping the O'Malleys viable by forcing her to marry an O'Malley cousin.

Miren, however, has long wanted freedom from the O'Malley traditions and makes some plans of her own.  In the course of her journey, Miren meets with all manner of strange creatures: kelpies, ghosts, corpsewights, and other Irish folkloric creatures.

All the Murmuring Bones is a slow paced experience, steeped in Gothic and Irish folklore.