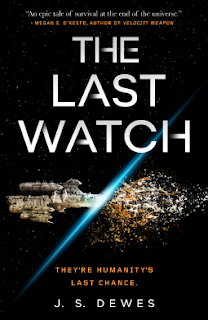 Science Fiction is one of my favorite genres, and J.S. Dewes' debut novel The Last Watch was a compelling adventure in space. The absorbing plot and engaging characters kept me enthralled.
description: "The Divide.

It’s the edge of the universe.

Now it’s collapsing—and taking everyone and everything with it.

The only ones who can stop it are the Sentinels—the recruits, exiles, and court-martialed dregs of the military.

At the Divide, Adequin Rake, commanding the Argus, has no resources, no comms—nothing, except for the soldiers that no one wanted.

The Sentinels stationed on the Argus are a mixed bag that have some problematic reason for their posting: hacking, disobeying an order, lack of respect for officers, etc.  Adequin Rake, the Commander of the Argus, is a Titan--one of the elite soldiers during the last war.  Titans are legendary heroes and Quin is one of the best known...so why has she been relegated to the edge of the Divide?
The first chapter begins with a "spread your legs" scene as a new recruit goes through the physical examination of entering his new post.  Cav Mercer is relieved that his reason for being banished to the Argus has been redacted; he'd rather no one know his identity and lineage. Brilliant, with a list of advanced degrees, Cav is also a smartass. A failing he needs to overcome if he is going to survive as a new recruit with no military background.
The Last Watch is a smart military space opera with a gripping plot and characters you can't help but root for as they attempt to stave off the collapsing of the universe.
Read in Oct.; blog post scheduled for March 1, 2020.
NetGalley/Tor/Forge
Military Science Fiction, Space Opera  April 20.  Print length:  480 pages.
Posted by jenclair at 5:30 AM