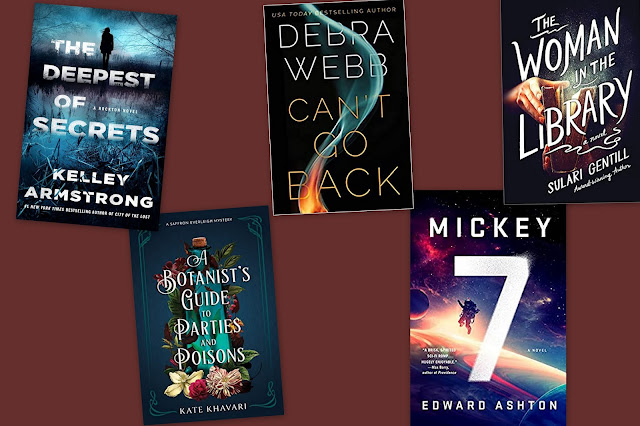 Can't Go Back by Debra Webb

The third book in this series featuring Detectives Kerri Devlin and Luke Falco is evidently the final one in a trilogy.  I enjoyed the first two books and looked forward to this one.  A woman and her child are found dead when an arson fire destroys the home; the husband confesses.  Something is off and the evidence doesn't appear to point to him.  The story connects to Luke's dark past as he recognizes the husband as a fellow undercover cop.  Luke has tried to put his past behind him, but the current case leads back to his time in an elite group of undercover cops and some things that many would like to remain forgotten.  I like the characters, and I'm sorry that this is the final book.  read in July

Mickey7 is an Expendable--good for any suicidal mission or scientific study.  Mickey volunteered for the expedition to colonize Niflheim, but he was in a hurry to get away from Midgard, and he didn't quite understand the "immortal" part of his new position. He's disposable, he dies (but the deaths are not painless), and he comes back in another iteration with most of his memories.  BUT there is never supposed to be more than one at a time.  Mickey8 comes out of the tank after Mickey7 is written off as dead, but Mickey7 is still alive and kicking. Problems ensue.  Interesting premise with some ponderings about what makes us who we are.   read in October

The Deepest of Secrets by Kelley Armstrong

Well, the previous book hinted at the end of the Rockton series, and The Deepest of Secrets is the 7th and final book about Rockton and its inhabitants.  A lackluster conclusion to a fun series.   read in September

The Woman in the Library  by Sulari Gentil

An interesting embedded narrative.  Australian author Hannah corresponds by email with American author Leo.  She develops a story about four people in the Boston library who are at the same table when they hear a scream.  Hannah sends chapters by email to Leo, who comments and makes suggestions.  But what  about the four people (in Hannah's story) who hear the cry, the ones sitting at the library table, and later learn about the death of a young woman?  Is one of them a murderer?  A clever technique for a mystery--a frame story, a story within a story.  read in October

A Botanist's Guide to Parties and Poisons by Kate Khavari (June 7, 2022) read in October

The cover drew me in, but the pacing was a little slow.  Saffron Everleigh's mentor is accused of poisoning the wife of the man set to lead an expedition to the Amazon.  Historical mystery set in the 1920's, mystery, a little romance.  read in October