Bryce Eleanor was released into her parents' custody on Saturday. She is quite happily making her presence known in her new household where she is observed by her parents and the three doggy friends who are eager to know her. 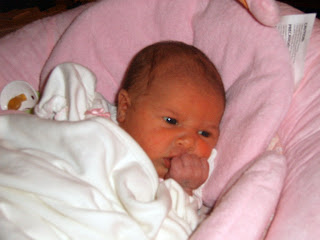 Doesn't she look as if she is from another century in her little mob cap? 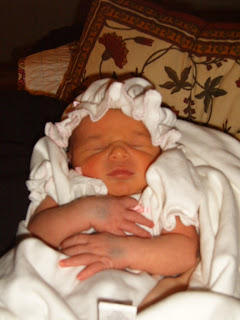 I'm still trying to catch up on blogs and comments and emails and reviews and wrapping presents and Fee's Solstice gifts ... and so on and on. Thanks again to all of you who have sent your kind comments and well-wishes!

One review down and another in process. Three other books started.

I've been having a fine (and sometimes hectic) time preparing the gifts for Fee's birthday/Solstice. His birthday is December 22 and always coincides closely with the Solstice. I've managed a gift every day through the past 17 days; each is accompanied by a quote. We are fast approaching the 22nd--Whew! Here and here are some of the gifts which I've been posting on Bayou Quilts.
Posted by jenclair at 11:20 PM