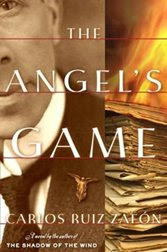 Evidently many were eagerly awaiting this novel's translation into English. By the author of Shadow of the Wind, The Angel's Game is both a stand-alone novel and a prequel/sequel/parallel universe/or something. Since I had not read The Shadow of the Wind, I read this advanced reader's copy as a stand-alone. It has taken me a long time to get around to this review.

Initially, I thought I'd love it. The prose is lyrical, smart, and often witty. My only quarrel with the translator is that there are many phrases that are contemporary and the novel is set in Barcelona in the twenties and thirties. Nevertheless, the prose flows, the descriptions of Barcelona are vivid, the gothic elements are, at first, quite suspenseful.

My initial hopes for the novel did not hold up. The gothic elements lost suspense, the characters were, for the most part, not too likable. I did like some of the minor characters, but David, the narrator and main character, became less and less likable. Not that you hated him, but more like...who cares, you dimwit.

His relationship with Christina was always so nebulous and undeveloped that his love/obsession was a bit puzzling. Isabella was much more 3 dimensional, alive, vibrant.

The novel was too long to maintain the suspense, there were frequent build-ups, but they kind of sizzled out. The last of the book was full of murders that just seemed unnecessary and strangely, kind of boring. Conclusion? Ahhh, none...because it is a prequel/sequel/parallel universe or something.

Reviews of the novel that I found were mostly positive, although several of Zafon's fans were disappointed. Here are some opinions at GoodReads. Note all the stars. In spite of the excellent prose, I would give it only 1 star, but again, I'm in the minority. Nice cover, though.

This one was not for me. Really.