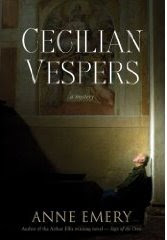 Set in Halifax, Nova Scotia, the novel is the fourth to feature lawyer Monty Collins and his friend Fr. Brennan Burke. Father Burke is the head of a school for traditional church music, the Schola Cantorum Sancta Bernadetta, and the students include both church and lay participants, not all of whom are in favor of tradition. When a well-known German monk is murdered, there are plenty of suspects who either have no alibi or give misleading information.

Although another monk confesses, Monty and Fr. Burke believe the confession to be false and must continue their investigation.