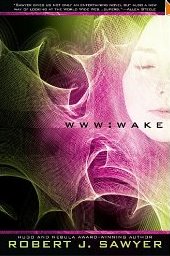 w w w: wake is an unusual book.  It is the first in a trilogy about...the awakening of the web.

Young Caitlin Decter is young, a math prodigy, web savvy, and blind.  When offered a new and experimental implant that might help her see, she is thrilled and jumps at the chance.  The implant, however, provides a view into the web realm, and she discovers (as it is discovering her) something else, another consciousness.

Or stories, I should say, because there is more than one story going on here, and although they involve different people in different countries and different fields, the relationships become more and more evident.

Robert J. Sawyer has won all three of the world's for science-fiction:  the Hugo, the Nebula, and the John W. Campbell Memorial Award -- only one of seven writers ever to do so.  He has, in fact, won forty-one national and international awards for his fiction.

The library is holding the next book in the series for me now.  Yes!