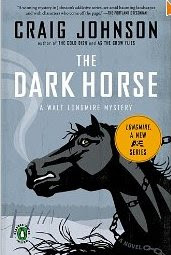 Dark Horse  is another Walt Longmire novel, and you probably know by now that I enjoy these novels by Craig Johnson.  Longmire is the sheriff of the fictional Absaroka County in Wyoming and with his friend Henry Standing Bear, Longmire takes up the causes of the weak, the helpless, the underdog, the victimized.

Mary Barsad is transferred to his jail from another county, accused of killing her husband who set fire to their locked barn killing all of Mary's beloved horses.   Her husband's death causes no tears for any who knew the brutal man, but Mary confessed and will be held responsible for his murder.


Longmire, however, senses something amiss and goes undercover as an insurance agent to discover exactly what happened the night of the murder.

Told in two time periods--Longmire's current undercover attempts to discover what really happened  that night and flashbacks to the previous ten days--the reader is moved back and forth from present to past until nearly the end of the novel.


Johnson's novels are character driven, and he excels at bringing both primary and secondary characters to life.  Both familiar characters and new characters seem to breathe on their own, and the Wyoming landscape is always well done, becoming a character in its own right.


I highly recommend this series which is highly entertaining in a number of ways.

Craig Johnson has received both critical and popular praise for his novels The Cold Dish, Death Without Company, Kindness Goes Unpunished, Another Man's Moccasins and The Dark Horse. All five novels have been made selections by the Independent Booksellers Association, and The Cold Dish was a DILYS Award Finalist and was translated into French in 2009 as Little Bird and was just named one of the top ten mysteries of the year by Lire magazine and won the Prix du Roman Noir as the best mystery novel translated into French for 2010.

Death Without Company was selected by Booklist as one of the top-ten mysteries of 2006, won the Wyoming Historical Society's fiction book of the year. The short story, Old Indian Trick, won the Tony Hillerman Mystery Short Story Award and appeared in Cowboys & Indians Magazine.

Another Man's Moccasins, was the recipient of Western Writer's of America's Spur Award as Novel of the Year and the Mountains and Plains Book of the Year.
The Dark Horse, the fifth in the series has garnered starred reviews by all four prepublication review services, one of the only novels to receive that honor and was named by Publisher's Weekly as one of the top one hundred books of the year.