Recently arrived in the mail:  4 ARCs and 1 uncorrected proof. 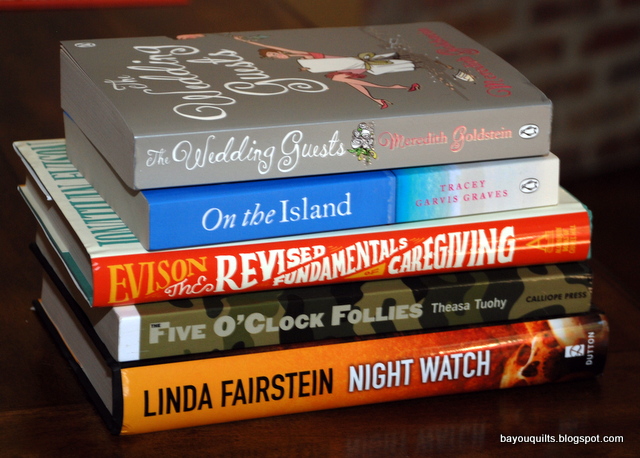 The Wedding Guests by Meredith Goldstein:
"From Meredith Goldstein, the author of the Boston Globe's hilarious 'Love Letters' advice column, comes her debut novel The Wedding Guests. This light-hearted, witty tale about five tricky wedding guests is perfect for fans of the box office smash hit comedy Bridesmaids."
On the Island by Tracey Garvis Graves:
"Anna Emerson is a thirty-year-old English teacher desperately in need of adventure. Worn down by the cold Chicago winters and a relationship that’s going nowhere, she jumps at the chance to spend the summer on a tropical island tutoring sixteen-year-old T.J.T.J. Callahan has no desire to go anywhere. His cancer is in remission and he wants to get back to his normal life. But his parents are insisting he spend the summer in the Maldives catching up on all the school he missed last year.Anna and T.J. board a private plane headed to the Callahan’s summer home, and as they fly over the Maldives’ twelve hundred islands, the unthinkable happens. Their plane crashes in shark-infested waters. They make it to shore, but soon discover that they’re stranded on an uninhabited island."

The Revised Fundamentals of Caregiving by Jonathan Evison:
Title will be released on August 28.  I read and enjoyed West of Here by Evison, so I'm interested in this one.
"Benjamin Benjamin has lost virtually everything—his wife, his family, his home, his livelihood. With few options, Ben enrolls in a night class called The Fundamentals of Caregiving, where he is instructed in the art of inserting catheters and avoiding liability, about professionalism, and on how to keep physical and emotional distance between client and provider.But when Ben is assigned to tyrannical nineteen-year-old Trevor, who is in the advanced stages of Duchenne muscular dystrophy, he soon discovers that the endless mnemonics and service plan checklists have done little to prepare him for the reality of caring for a fiercely stubborn, sexually frustrated adolescent with an ax to grind with the world at large.Though begun with mutual misgivings, the relationship between Trev and Ben evolves into a close camaraderie, and the traditional boundaries between patient and caregiver begin to blur as they embark on a road trip to visit Trev’s ailing father. A series of must-see roadside attractions divert them into an impulsive adventure interrupted by one birth, two arrests, a freakish dust storm, and a six-hundred-mile cat-and-mouse pursuit by a mysterious brown Buick Skylark.Bursting with energy, this big-hearted and inspired novel ponders life’s terrible surprises and the heart’s uncanny capacity to mend."
Five O'Clock Follies (uncorrected proof) by Theasa Tuohy:
Kirkus Review--"A freelance writer struggles to find her place among hard-nosed newsmen covering the Vietnam War in this depiction of wartime journalists.
In her debut, former Associated Press editor Tuohy describes the Vietnam War through a journalist’s lens. Freelance writer Angela Martinelli arrives in Saigon in 1968, wearing her “greenness” in the form of high-heeled shoes and a gorgeous mane of red hair. As one of the few women correspondents in a war zone, Angela is greeted with misogyny, skepticism or disdain by her male colleagues, except for Nick, who works for a Chicago newspaper and gives her the benefit of the doubt."
Night Watch by Linda Fairstein:
I've enjoyed several of Fairstein's Alexandra Cooper novels and look forward to this one.
"Forty-eight hours after Alexandra Cooper arrives in France to visit her boyfriend and famed restaurateur, Luc Rouget, her vacation in paradise is cut short when a young woman from the village is found murdered. The only evidence discovered on the body is one of Luc’s matchboxes promoting his new restaurant in New York. But before the investigation begins, Alex is summoned back to New York to handle a high profile case."
---
I'm really interested in the Evison and Fairstein novels because I'm familiar with the authors.  The other three sound more like romance novels, so I'm not too sure about them.
Posted by jenclair at 4:51 PM