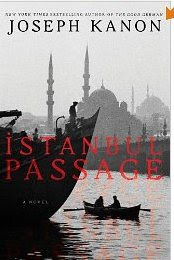 Istanbul Passage  evokes the atmosphere of late 1945, shortly after the end of the war.  During the war Istanbul remained neutral, and spies from all sides gathered there, but at the time the novel takes place most have departed.

Which is not to mean that unusual machinations had ceased.  Istanbul served as a kind of way station in the efforts to aid Jewish refugees in their efforts to reach Palestine.

After the war millions of displaced Jews who had survived the Nazi regime sought refuge in the newly established Jewish state.  The British had set up quotas that were minuscule to the numbers of survivors seeking to enter.  The story involves not only the smuggling of Jews into Palestine, avoiding the British blockade, but also the effort to smuggle a notorious Nazi collaborator to the U.S.

Leon Baur finds himself caught up in a number of deceptions that threaten his ethics, his life, and his livelihood.

Guilt, love, deception, and ethical questions abound in this story of a turbulent time; Leon Baur's difficulties mirror, in a way, the larger difficulties of nations.  Tense drama and great characterization.

Joseph Kanon's novels include Los Alamos (received an Edgar for Best First Novel) and The Good German (made into a film with George Clooney and Cate Blanchett).

I found the novel interesting on a number of levels and thoroughly enjoyed it.

This one was from Net Galley.