Disenchanted & Co by Lynn Viehl and Some Thoughts

Thoughts:  When I read Disenchanted & Co., Part 1, I had already downloaded Part 2, so I was aware that it was not a stand alone.  When I finished Part 1, I had the same thoughts I've had quite often lately:  why write a relatively short novel with a cliffhanger instead of a longer novel that completes the story.

Of course, one reason might be that by dividing one book into parts and selling each of them separately could result in financial benefits.  I don't mind trilogies or series, especially in fantasy, but I do expect to get enough satisfaction out of each one to make it worthwhile.  David Weber,  George R. R. Martin and Robin Hobb excel at this.  Each novel is a meal in itself, not simply an appetizer.

The recent tendency, however, seems to be to create a trilogy or series of short novels for either financial reasons or because the author (editor, publisher?) has decided that readers dislike long books.

The interesting thing about Disenchanted & Co., however, is that the novel is being released in two ebooks, but it looks as if the entire novel will be published (containing both Parts 1 & 2) will be published in Jan., 2014.

Rather equivalent to someone like Dickens (and other Victorian novelists) having his novels published in serial form in weekly installments.  Dickens allowed public reaction to his installments to influence the future of his novels.

Is this a possibility for Lynn Viehl?  If so, the final version to be published early next year may be heavily edited and a better novel. 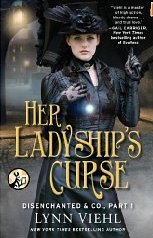 Plot:  Kit Kittinger is a young woman who has established her own business in a male-dominated society.  Kit is a sort of psychic investigator who is hired by individuals who seek to remove curses and solve other magical problems.  What Kit does, at least in her own estimation, is discover the actual cause of the problem and put it right.  Kit does not believe in magic.

When called on by Lady Diana and asked to dispel the curse that is actually causing hateful words to be carved on her body, Kit finds herself involved in a conspiracy that threatens not only her life, but that of the entire city, and perhaps more.

Good:  A steampunk fantasy that does not depend solely on steampunk elements, but has an interesting plot and interesting characters.  Kit is a plucky and witty young woman who has a somewhat mysterious background and a group of friends from all layers of a very segmented society.

Dredmore is an ambiguous personality, and the anagram of his name stood out immediately.
His relationship with Kit may be a bit overdone and is certainly a familiar trope.  Actually, this may be intentional as most of the characters are over the top, including the Madam with a Heart of Gold.

Not so Good (at least for me):  The alternative history doesn't serve any real purpose and is initially a bit confusing.  (I first thought they were in Australia)

I did not care for Kit's willingness to surrender her high-minded stubborness and so easily accept the Gothic ravishment. (bodice ripper!)  Nor did I really like her swaying from one opinion to another with Dredmore so quickly and frequently. 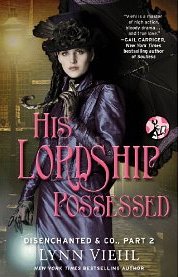 The cliffhanger from Part 1 is resolved, but the plot behind Lady Diana's "curse" is a deeper and more complicated situation, involving much more than the Walsh family.

Kit must do some research into her own history. Once she determines who the villain really is, she must try to prevent a devastating event that threatens the entire country.