The Wayward Pines Series, 1 and 2

A little bit mystery, a little bit horror, a little bit sci fi,  and a lot of suspense.  Hard to fit the Wayward Pines series into a genre.  Is the story credible?  No.  But engrossing?  Oh, yeah.

I received the second in the series from NetGalley and finished it in short order, practically in one sitting.  On finishing, I headed directly to the computer to order the first in the series from Amazon and was reading it on my Kindle the same day.

Although I read the second book first, I will review them in order. 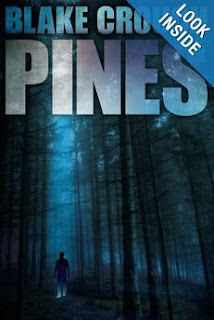 Pines by Blake Crouch opens in a strange and bewildering way that leaves the reader in the same place as Ethan Burke, the FBI agent who awakes after an accident in the town of Wayward Pines--a bit befuddled and certainly perplexed.

from Booklist:  Ethan Burke is on his way to the small town of Wayward Pines to find two fellow federal agents who have gone missing. He has a bad car accident on the edge of town, waking up in the hospital and not at all sure of what is going on. The psychiatrist on staff tells him that he has suffered a brain injury and warns him not to leave, but he takes off anyway. The town sheriff is less than helpful, and, with no ID or money, Burke can’t reach his superior or his wife, and he starts fearing for his sanity (reminiscent of Dennis Lehane’s Shutter Island)....

Reading the novel feels as if you've entered the Twilight Zone, or if you watched Twin Peaks, you may realize that Blake Crouch took that television series as an inspiration.  At any rate, you will want to know just what is going on in this apparently idyllic little town of Wayward Pines.  You will have to ignore some failures in logic concerning the townspeople's behavior at times, but that doesn't make events any less frightening. 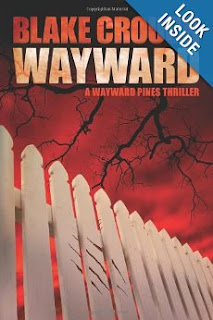 Wayward takes up where Pines left off.  It is the second in the planned trilogy; the third should be published in 2014.

More information on the town and the inhabitants is revealed, but the feeling of tension never lets up.  Solving a recent murder becomes a priority for Ethan Burke, but what he discovers shocks him deeply.

It is difficult to give much information without spoilers, but once again, the suspense is dramatic.

The ending was a disappointment because of its abruptness, but I will certainly be sure to get next book in this trilogy.