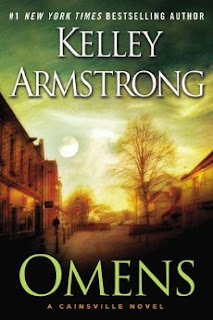 Omens  provides me with a new author and a new series.  I was pretty much swept away by this one, not wanting to put it down, eager to follow the plot and the characters.

Book description:  Twenty-four-year-old Olivia Taylor Jones has the perfect life. The only daughter of a wealthy, prominent Chicago family, she has an Ivy League education, pursues volunteerism and philanthropy, and is engaged to a handsome young tech firm CEO with political ambitions.
But Olivia’s world is shattered when she learns that she’s adopted. Her real parents? Todd and Pamela Larsen, notorious serial killers serving a life sentence. When the news brings a maelstrom of unwanted publicity to her adopted family and fiancé, Olivia decides to find out the truth about the Larsens....

Olivia is bright and self-possessed; she makes decisions and follows through without dithering.  She makes mistakes, but it doesn't alter her self-confidence or her determination.  Despite the terrible revelation of her parentage, Olivia doesn't become a whiner.  I found her a likable and interesting character.

At first, her intention is just to get out of the limelight, but once she ends up in Cainesville, Olivia has time to assess her situation and decides to inquire a little further into the lives of her biological parents.  She begins working with her mother's former lawyer, and the two develop an antagonistic relationship initially, as Gabriel Walsh makes his personal finances his first priority.

The association remains push/pull, but the two manage to get along most of the time as they try to unravel how the murders came about.

This was a fast and compulsive read, and I enjoyed it thoroughly.

An ARC from Kathleen Zrelak with Goldberg MacDuffie Communications and Dutton.