Traveling with the Dead by Barbara Hambly 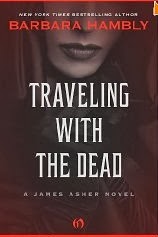 Traveling with the Dead , the second novel in this series, picks up in 1908.  James Asher, ostensibly the mild-mannered Oxford don, but in reality a former spy, happens to glimpse an old enemy, Ignace Karolyi with vampire Charles Farren, Earl of Ernchester.  This meeting can promise no good to the Empire, especially with all of the troubles that are already boiling over in Eastern Europe.

James follows the pair to Paris, hoping to discover what reason an enemy spy and a dangerous vampire could have for teaming up.  And there is someone else on their trail.  From Paris, the journey leads to Vienna, and finally, to Constantinople.

Lydia, worried about James, eventually seeks the aid of Don Simon Ysidro and takes off on the trail of her husband, but she is not the first to be following James.  Danger and death always accompany a vampire, and added to that are the machinations of the world of spy craft.

As in the previous novel, the writing is excellent and the characters well-drawn.  Hambly is able to create fascinating characters and a convincing atmosphere of the years that presage WWI as she casually drops in some of the events and conflicts that are building in Europe:  German Nationalism, unrest in Slavic countries, the call for social reform.

I am grateful to NetGalley for introducing me to this series with Hambly's latest James Asher novel The Kindred of Darkness, due to be released in March.  It was this ARC that instigated my interest in the series, and I will be scheduling that review for some time in February.

Now that I've read Those Who Hunt the Night and Traveling with the Dead, I'll certainly be seeking the next in the series soon.

Traveling with the Dead (Locus Award nominee 1996, winner of the Lord Ruthven Award 1996)

(Only two left for me to read in this series, so maybe I will give it a short rest, then, maybe I'll try one of Hambly's other series.)