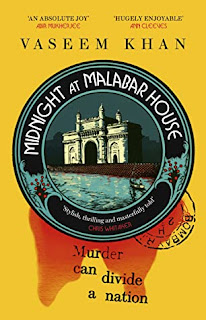 Cathy recommended Vaseem Khan as another author of Indian mysteries, and since I enjoyed Suhata Massey's The Widows of Malabar Hill and The Satapur Moonstone so much, I wanted to read Vaseem Khan's new series as well.

Midnight at Malabar House is set in Bombay, but where The Widows of Malabar Hill is set in the 1920's as Ghandi's influence is increasing, Midnight at Malabar House begins on New Year's Eve 1949--after the 1947 partition of British India into two independent dominions, India and Pakistan.  From both historical accounts and a novel read years ago (I don't even remember the name), I knew this was a bloody and tragic period of sectarian violence and massacres.

Persis, however, is determined to do her job regardless of prejudice and setbacks, and when she gets the call that Sir James Herriot, an important British diplomat, has been murdered, she finds herself in a sensational and delicate case amplified by the fact that she is female and the case is virulently political.

Midnight at Malabar House is an excellent mystery, but as I read, it was so many of the passages and events that reminded me of our contemporary problems, not only here in America, but in many countries.  We have pasts (and contemporary problems) that we would prefer not to acknowledge.

"Inflame a man's passion and you can make him do anything."

"Evil could only flourish if the world colluded with it."

"How was a nation to establish itself if it could not look itself in the mirror."

"Thought Police, in particular, bothered her, the idea that individualism and independent thinking might actually be considered a crime."

"And that today many want that restriction."

"Men, women, and children murdered.  All in the name of patriotism."

"We all know what happened," she said.  "The trouble is that a new fiction is being written.  Day by day we are rewriting the past."

"...who set aside decades, sometimes centuries of friendship, who took up sword and flame to terrorise their neighbours and compatriots, to murder men, women, and children in a frenzy of bloodlust that even now is difficult comprehend."

"That is the true legacy of Partition.  The way it has coloured the perceptions of two peoples who were essentially one, the way it continues to serve as a means by which political interest on both sides of the border can employ hatred and prejudice as a means of deflecting criticism of their regimes."

Recommended for both the mystery and the history.  And now I want to read The Dying Day by Vaseem Khan.

I keep weeding, fighting mosquitoes, and retreating upstairs to work on my little monsters.  As Les at Coastal Horizons mentioned in a comment, listening to an audio book makes weeding less onerous, but darn, the heat!

The blue jays that had been visiting for the peanuts I put out for them have been absent lately.  I suspect the aggressive mockingbird who patrols the yard and dive bombs Edgrr may be responsible.  Mockingbirds can intimidate other birds, but I would have thought blue jays would be worthy enough opponents.  At any rate, I miss the blue jays; they have their own feeder with nothing but peanuts and no other birds seem to want them.