The Witch Hunter by Max Seeck 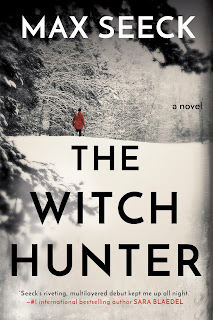 When I received The Ice Coven from NetGalley, it didn't take long to realize that I had not read the previous novel and that it might be a good idea to go back and pick it up.  I stopped and ordered The Witch Hunter and read it first--although I already had some information the reader was not supposed to know from reading even a little of the second book.                                                                                                                                       Jessica Niemi is called to the scene of a murder, and it is a strange scene indeed.  Disturbing, not because of blood or gore, but because of the way the woman is dressed and the expression on her face.  Maria Koponen, wife of a best selling author, has been murdered in a way that imitates the death of a character in her husband's first book in his trilogy about the Inquisition and torture of witches.  More deaths are to come and while some do not precisely imitate the murders in the book, they are too similar to dismiss, and investigator Jessica Niemi realizes that there is not a single, lone killer, but a cohesive cadre of believers.  But believers in what?  Witchcraft?
The novel is dark, creepy, and suspenseful, but not entirely satisfying.  The concept of murders imitating those of a novel isn't new, but there are twists in this one to take the idea further.
The flashbacks to Jessica's sojourn in Venice when she was nineteen were ugly, unnecessary, and interrupted the pace of the main plot.  The interruptions add nothing of importance to the plot except for the introduction of a character that could have been better served in another way.
The Witch Hunter is suspenseful and sinister, and to give the author credit, he does not engage in gory details, especially since those details are not needed when the creep factor is so high.  The conclusion was rushed and unsatisfying, obviously setting up for the second book.
The author does a good job of building atmosphere and suspense, some of the characters are sympathetic, and he skillfully keeps the reader from knowing one important detail.
On the other hand, the gratuitous backstory in fitful intrusions, an unbelievable premise (once you realize what it is near the end), and the hurried and open-ended conclusion make me wonder if I want to read the Ice Coven...even though I already have it.
NetGalley/Berkley
Mystery/Thriller.  2020.  Print length:  400 pages
Posted by jenclair at 8:39 AM