Horseman by Christina Henry and Tahoe Blow Up by Todd Borg 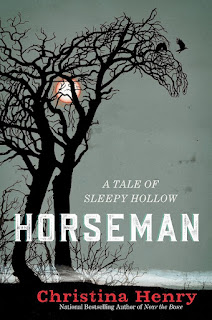 A wonderful cover, but unlike The Girl in Red, Horseman doesn't deliver.  At first, I thought it would be a fun take on the original.  When the two fourteen-year-olds were playing Sleepy Hollow Boys, I expected to love this different perspective on Washington Irving's short story "The Legend of Sleepy Hollow.  Instead, the story begins nearly thirty years later.

Which was fine and still promising.  Brom and Katrina have married, had a son, lost both their son Bendix and their daughter-in-law, and have been raising their grandchild, Bende, usually shortened to Ben.

As a coming-of-age or self-actualization story, Horseman does have some merit, but in the end, the impact is lost.  The first person narration tends more to "telling" than showing and feels clumsy--like explanations of what is happening.

I looked at some reviews and there are plenty of positive reviews, so the fact that I was disappointed, doesn't mean that you will be.  And no one can fault the cover! 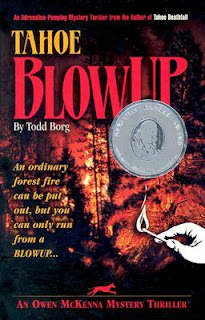 In early August, I read Tahoe Death Fall by Todd Borg and felt glad to be at the beginning of a long series which will be there when I need something to read in those periods when the pickings are poor or when a book I thought I'd enjoy ends up being abandoned.

Of particular interest is the plot.  Owen McKenna is alerted by Spot, his Great Dane, and realizes that a fire is rapidly moving up the mountain toward his cabin.  The speed of a forest fire depends on fuel, weather, and terrain and can move as fast as 10 mph.  All conditions are present when McKenna registers the danger, and the fire is quickly moving up the slope at frightening speed.  He notifies his closest neighbor and picks her up as quickly as possible to escape being trapped by the fire.

With all the fires currently burning across the West, the book felt even more relevant  Aside from the search for the arsonist, the information about forest fires was educational.  Blow ups, sudden increases in intensity that risk fire fighters losing control; trees that are more flammable and those that have greater resistance; methods and equipment used in fighting forest fires are all included as McKenna, the fire department, and the forest service deal with the fires.

I like the characters and, although the arsonist is not too difficult to spot, I enjoyed the way the plot played out.