The Last Time She Died by Zoe Sharp 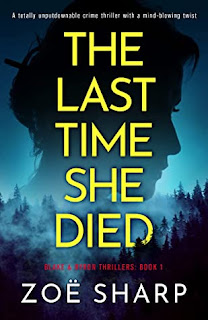 Gideon Fitzroy never reported his daughter Blake as missing, instead, he encouraged the rumor that Blake was a runaway.  Ten years later, shortly after Fitzroy's death in an auto accident, Blake Fitzroy shows up at his funeral.

Unsurprisingly, his second wife as well as several others are shocked and dismayed at the arrival of a calm, cool twenty-five-year-old on the scene claiming to be Blake.

The Blake who shows up is not the shy fifteen-year-old who went missing a decade ago, but a composed, self-possessed young woman.  A  con artist, hoping to gain control of the estate through the will?

Detective John Byron, on medical leave from the Met, has also shown up for the funeral.  He has no official authority, but it appears that he does have a purpose.

Byron is a shrewd and competent detective, but he is on medical leave, not at all certain he should be back at work, and a little curious about this assignment.  His boss, however, wants Byron back in the game unofficially in order to motivate his interest in returning to work full time.

Unsure what to think about the young woman claiming to be Blake Fitzroy, Byron is intrigued.  His initial assignment changes with Blake's unexpected arrival throwing everything up in the air.

Blake has an agenda, but her goal seems less to do with gaining an inheritance and more to do with the events that caused her to runaway ten years ago...and to stay away until Gideon Fitzroy was dead.  If she is, indeed, Blake Fitzroy.  And whether or not she is, Blake certainly has some skills in housebreaking.

Both characters and plot kept me involved and eager to know what happened next! Enough information to make you eager to keep track of details, but not enough to feel confident who is responsible.  Exactly the way I like it. :)

An absorbing and entertaining mystery with characters I'm eager to read more about!

I don't answer unknown numbers,
but I do think this would be fun. 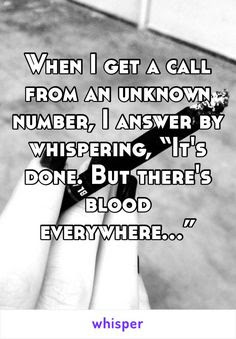