Little Thieves by Margaret Owen, Gated Prey by Lee Goldberg, The Killer in the Snow by Alex Pine 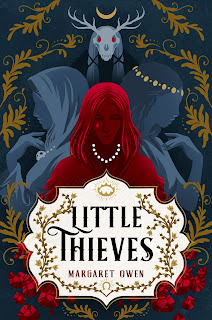 Little Thieves is a retelling of the Goose Girl fairy tale by Margaret Own from the perspective of the maid who stole the princess's identity.
The book starts well.  Vanja has usurped the princess's identity and is stealing from wealthy aristocrats in order to buy herself a chance at freedom.  Vanja's godmothers, Death and Fortune, have made it clear that a certain time Vanja must choose between serving one or the other her godmothers.  Vanja, however, is determined to be in service to no one.
After a heist that she hopes will provide the final amount to buy her freedom, she encounters one of the lesser gods who curses her, but gives her two weeks to break the curse.
So much is going on in Little Thieves, the "princess" is soon to be married off to a brute of a man, Vanja needs to get free before that marriage takes place, the real princess is in the village in much reduced circumstances and justifiably angry, a Junior Prefect arrives to catch the jewel thief--and the story devolves in a half dozen ways.
Much of the Little Thieves is very good.  I like the idea of telling the story from the POV of the maid that takes over the life of the princess.  Vanja can be practical and funny, but at sixteen, she isn't always seeing the situation clearly.  The curse is one that is intended to make Vanja consider events in a different light AND has another purpose besides punishing Vanya.
There is a lot going on, suspense, a little romance, a growth experience, all kinds of complications cropping up.
Somehow though, I was never as invested as I wanted to be.  I enjoyed it, but didn't love it.
Two of my favorite fairy tale re-imaginings of the Little Goose Girl story are Shannon Hale's The Goose Girl in her Bayern series and Intasar Khanani's Thorn.
NetGalley/MacMillan's
Teens/YA.  Oct. 19, 2021.  Print length:  512 pages 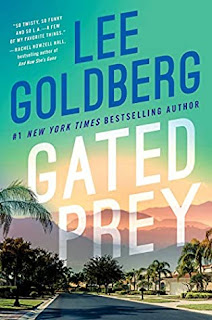 Gated Prey is the third entry in Lee Goldberg's Detective Eve Ronin series.  In order to have a better understanding of the background, it is better to begin with the first and second books that explain how rookie Eve Ronin ends up in the homicide squad and the resentment the Sheriff's department expresses toward for her high profile appointment and for her role in exposing the corruption in the department.

Two plot threads are included in this third book.  One has to do with a Eve and partner Duncan Pavone pretending to be a wealthy couple in order to catch the home invaders who have been hitting very wealthy homes in an exclusive and gated community.  The second has to with Eve's questions about a still birth that has serious implications.

From the first book, Duncan Pavone's imminent retirement has been discussed.  If Duncan retires, I'm not sure the series will succeed.  His mentorship and support help keep Eve balanced.  He is the perfect experienced foil to Eve's impulsiveness. 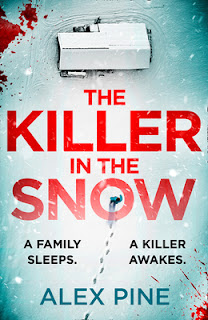 A man, his wife, and his daughter are murdered in an isolated farmhouse.  The murders are similar to murders that occurred in the same farmhouse twenty years earlier.  Too similar to ignore.

This is the second book in this series, and I didn't read the first one.

There are some twists, but an important plot thread seemed obvious from early on.  I didn't find the main character Detective James Walker particularly appealing and the references to a couple of previous cases felt more digressive than important.

Alex Pine has written a series of books on true crime, but I believe this is only his second novel.