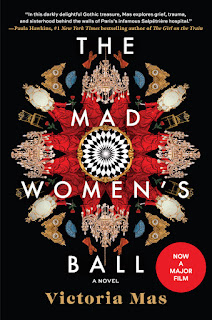 Throughout history, men have used many ways to remove difficult or embarrassing wives and daughters.  Women who, for one reason or another have proven troublesome (for husbands, fathers, or brothers) have often found themselves relegated to asylums.  Whether because of mental illness, refusal to stay in their place, adultery (of either partner), or financial incentives--asylums have provided ways to remove inconvenient women.

In 1885 in Paris, Eugenie, a young woman in a controlling, patriarchal household, reveals to her grandmother that she "sees dead people."  As a result, she ends up in the Salpetriere Asylum.  Eugenie was already problematic for occasionally taunting her father, and he takes the opportunity to relieve himself of her presence.

The asylum under Dr. Jean-Martin Charcot was in much better shape than it had been previously, and Charcot made many advancements in science, but "Charcot had come to believe that susceptibility to hypnosis was an indicator of latent hysteria. He based this belief on the fact that hysterical symptoms could be reproduced by hypnotic suggestions (Fancher, 1985, p. 54)." (source)

Women in the Salpetriere Asylum range from those who suffer from epilepsy, dementia, "hysteria", sexual trauma, and in Eugenie's case the insanity of seeing spirits.  But Eugenie is not insane, and soon enough, Genevieve, the head nurse has to deal with this particular problem.

The book is short and well-researched, and I found it intriguing in its rather unusual approach.  The inclusion of spiritualism, family dynamics, and the names of Charcot's famous students were sometimes at odds.  Medical science, especially in the area of mental health, has undergone remarkable and often cruel trends and so have cultural norms.  Women are much better off today--they can vote, get divorced, retain custody of their children, work outside the home, etc.  And yet...women are still expected to meet some of the social norms of a century ago, don't trust that reporting abuse will be taken seriously, and are called hysterical if they respond in a manner accepted as OK for men.

Women Who Defied Gender Roles Were Once Imprisoned in Asylums

Restoring Perspective: Life and Treatment at the London Asylum

Women's Admission to Asylums in United States of America

It was difficult to find accounts of the Le Bal des Folles at the Salpetriere Asylum because almost everything led back to the novel and the upcoming film, but I finally found this.