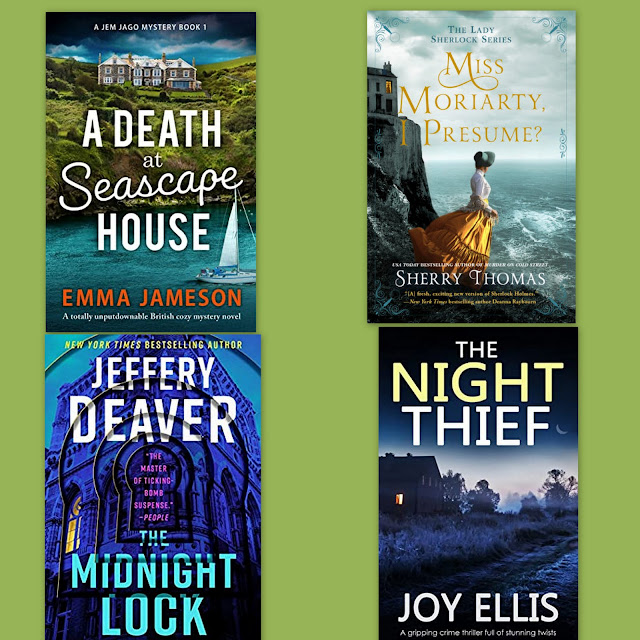 A Death at Seascape House by Emma Jameson.  Mystica mentioned this series, and I thought it sounded like fun.  It was.
Librarian Jemima Jago is divided about her feelings concerning her return to St. Morwenna in the Scilly Isles of Cornwall.  She's excited about the opportunity to catalog St. Morwenna's largest collection of antique books, but she left twenty years ago under less than auspicious circumstances and dreads seeing some of the residents.

Immediately on her return, Jemma discovers the body of the island busy-body, meets an old boyfriend, and becomes the chief suspect in the murder.  Not as cozy as many cozies, although there is an amateur detective, a closed community, and no graphic violence, there is more depth and character development.

Light and often amusing at times, some quirky characters; I enjoyed it and went on to read the next one which I'll review later.

Miss Moriarty, I Presume (Lady Sherlock #6) by Sherry Thomas continues the adventures of Charlotte Homes, Lord Ash, Mrs. Watson, and Livia.  Another series I've followed from the beginning, enjoying the plots and the characters.  This plot is more complicated than the earlier ones and depends a great deal on having read the previous books.

Moriarty, using the pseudonym of Mr. Baxter, arrives at Baker Street to hire Holmes (and he knows that Charlotte IS Holmes) to find out about his daughter who is secluded at religious estate in Cornwall.  The usual bravado Charlotte has shown previously is absent here; she is afraid of Moriarty--for herself and for her friends.  She can't refuse, but is aware that Moriarty wants to ensnare her in some way.

Lots of twists in this one, but this one felt very different from earlier installments.

The Midnight Lock by Jeffrey Deaver.  I haven't read a Lincoln Rhyme, the quadriplegic forensic scientist and criminologist, book in years, but I enjoyed reuniting with the familiar and relatable characters and the suspenseful, complex plots.

One thread has a young woman awake to discover that while she slept, someone has been in her apartment, moving things around, eating cookies while sitting in a chair watching her sleep, then taking a pair of her underwear, and leaving a note signed "The Locksmith" behind.  Creepy--especially as part of the story is told from the Locksmith's pov.  The indication is that at this point, the Locksmith is content to just mess with her mind.  But he has other victims lined up as well, perhaps with intentions to more than frighten his victims.

The other plotline has Lincoln Rhyme forced to admit to a forensic error in the trial of a powerful and influential mobster.  It results in the Mayor ending Lincoln's job as consultant for the NYPD, which also means that he has to surrender all evidence in the Locksmith case as well. He is not to be involved in any police work.   But Amelia Sachs, Ron Pulaski, and Lon Sellito work at getting around the constraints placed on Lincoln by the Mayor.

There is quite a lot going on in this book--devious and twisty misdirections keep the reader from fully seeing the entire picture and there are threads that tangle in unexpected ways.

I enjoyed a revisit to the Lincoln Rhyme novels and really should catch up on some the books I've missed over the years.

The Night Thief (Jackman & Evans #8) by Joy Ellis has a similar creepy character as in The Midnight Lock--invading houses where women are sleeping and taking only photographs of their sons.  At first, it seems the culprit might be Ratty, who is known for midnight visits, but the photographs are certainly atypical as Ratty has never stolen anything.  So who is making the visits and stealing photographs of young boys...and why?

Rowan Jackman's partner, psychologist Laura Archer, has a patient who has been referred to her for his sleepwalking episodes.  Something about him bothers Laura and she reaches out to Sam Page for help with the man's somnambulism.

One reason I like Joy Ellis' books is that both the Rowan Jackman & Marie Evans and the Nikki Galena & Joe Easter books have well-developed members of their teams.  Over the course of the series, the minor characters have become so familiar, and I always look forward to the way they work together.  It isn't necessary to have read the previous books in the series since the mysteries are completed in each book, but the pleasure of having watched the secondary characters come to life over the series is a large part of my enjoyment in the books.

Two books set in Cornwall (although only A Death at Seascape House makes the most of the setting)  and two with midnight visitors.