This Stack and Library video 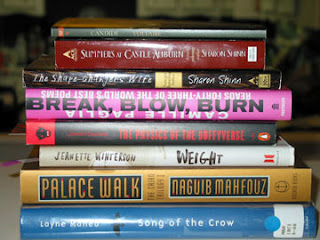 This is the stack I was working on in February. I've finished Candide; Break, Blow, Burn; The Physics of the Buffyverse; Weight; and Palace Walk. Didn't get them all read in February (they moved into March), but it is a substantial improvement.

Now, I only have 3 left in this stack to get through. The two by Sharon Shinn were both supposed to be for Carl's Fairy Tale/Fantasy Challenge, but I've already started The Shape-Shifter's Wife (really good, so far), and it is short, so I'll have it finished today or tomorrow.

In the meantime, I couldn't resist starting a Victorian mystery by Deanna Raybourn as soon as I finished Palace Walk. More on that later.

Of course, there is another huge stack that has moved into "current project" status, but I will post on that later as well.

Found this video over at The Laughing Librarian.

And if you need more titles to choose from, the Shortlist for the Commonwealth Writers' Prize has been announced.
Posted by jenclair at 11:48 AM