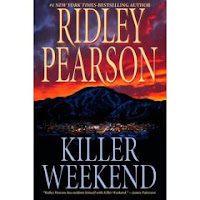 Pearson, Ridley. Killer Weekend. An ARC from G.P. Putam's Sons, due to be released in July. Attorney General Elizabeth Shaler, bound and gagged with duct tape, faces a killer with a knife. Noticing an abandoned bike and a damaged wooden screen, alert young patrolman Walt Fleming investigates. He manages to save Shaler, but suffers a serious knife wound in the process.

Eight years later, Shaler returns to Sun Valley as the keynote speaker at a conference where she is expected to announce her candidacy for president. Walt Fleming, now the county sheriff, joins the FBI and Secret Service in an attempt to foil a threat on Shaler's life. The groups are not fully cooperative, and added to the difficulties, are the complications added by Patrick Cutter, the billionaire who has organized the conference.

The assassin has managed to establish a clever disguise and presence at the conference. His machinations are interesting and creative. Other complications include the murder of the wife of a wealthy and influential conference attendee, a tense relationship between Fleming and his father, and the fact that Fleming's ex-wife is sleeping with his deputy.

A fun read, the novel speeds along. Fleming's character is likable and interesting; Shaler's character, however, never seems developed. Nevertheless, it is an enjoyable thriller.

Pearson, who has written a number of thrillers, is also the author of the award-winning children's novels Peter and the Starcatchers and Peter and the Shadow Thieves, both of which have been on my TBR list.