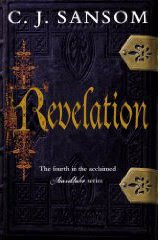 I've only read one other of these novels featuring Matthew Shardlake, but I really like the series and intend to read them all eventually.

Set in Tudor England, the first novel Dissolution deals with Henry VIII's determination to dissolve the monasteries and rid England of all papist taint. This novel takes place after the dissolution of the monasteries, but during a time when Henry seems to want "his" church to be Catholic without the pope. The problem is that the reformists (many of them having become zealous radicals) have no intention of going back, and Henry can be brutal concerning resistance to his will.

When Matthew Shardlake's good friend is murdered, he promises the widow that he will discover the murderer. What he doesn't realize at the time is that this is not the first murder and that he will be drawn again into political and religious matters that can prove deadly.

Sansom has the ability to bring the period and his characters to life even as the reader discovers much about history. I thoroughly enjoy the characters and the history of the turbulent times.

I had a few quibbles about the plot, but that didn't stop me from becoming completely immersed in the novel, the characters, and the danger of trying to walk the fine line between integrity and self-preservation. I really want to read the other two novels in this series!

Other Reviews: Nancy Pearl and Books Please. If you reviewed it, let me know and I'll post a link.