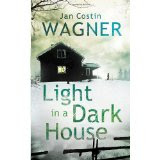 Light in a Dark House by Jan Costin Wagner and translated by Anthea Bell is the third in a series featuring Finnish detective Kimmo Joenta.

A woman, unidentified, has been lying in a coma for some time, and then is murdered by someone who wept as she died.   With her murder, the effort to discover who the woman was becomes more important, and detective Kimmo Joenta is puzzled and distressed by the case.

Kimmo's lover has also disappeared from his life.  Larissa was already a sort of on again, off again inhabitant of Kimmo's house, but this time an occurrence at a party preceded her leaving, and she is gone longer than ever before.  Kimmo yearns for her return, although nothing about their relationship is exactly normal.  Larissa is a prostitute, and when she does come to stay with Kimmo, she turns the light off and waits in the dark.  She is the light in the dark house for Kimmo.

The case of the murdered woman occupies the detective while Larissa is gone, and when the detectives finally determine who the woman is, they must go back to an incident that took place 25 years ago, using a photograph they find in the home of a man who has recently been murdered.

A psychological crime novel in which the murderer has recorded his thoughts; although we have no name, we have his point of view from his diary.

Egon Wallin, a respected art dealer, has made plans to leave his wife and has sold his art gallery without telling anyone.  Instead, he ends up hanged from the city wall in Old Town, Visby, Gotland.

(Strange Bird which I read recently is also set on the Swedish island of Gotland.)

Then  The Dying Dandy, a famous painting by Nils Dardel,  is stolen from a museum in Stockholm and something connected with the first crime is left behind.

Once again, we have the point of view of the murderer who remains unknown.  The prologue, although from an omniscient narrator, relates the the decision to commit his crimes.  The narrator moves from the murderer, to the  victims, to the Detective Superintendent Anders Knutas, to journalist Johan Berg...and back again.

Lots of interesting information about Swedish artists, particularly Nils Dardel, and plenty of discussion about The Dying Dandy.