Once again, synchronicity.  I enjoy reading about WWII, and two of my recent reads have been about the British SOE, the Special Operations Executive, that was created "to conduct espionage, sabotage, and reconnaissance in occupied Europe...and to aid local resistance movements."  (from Wikepedia)

Both novels take place in France and are frame stories, the war narrative contained within modern day stories that bracket the war years. 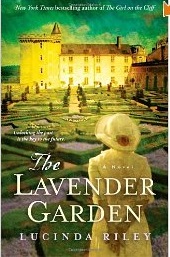 I read The Lavender Garden by Lucinda Riley first.  The story begins in 1998 in the Cote d'Azur when Emilie de la Martinieries' mother dies, and she inherits the estate.  A chance meeting with the Englishman whose English grandmother had sheltered at the estate during the war arrives in the local village.

Pursuing the connection leads to the discovery of details about young Constance Carruthers,  whose command of French and knowledge of the country, leads to her selection as an SOE operative in Paris during the Nazi occupation.  When the Resistance group she was to be part of is arrested shortly before her arrival, Constance finds herself resorting to her last possibility...and joins the household of a wealthy family that is engaged in resistance activity even as they entertain the Nazi elite.

The good:  As I began researching the SOE, it became clear that the author had done some extensive research.  She details information about the F Section;  the fact that women agents were commissioned into FANY (First Aid Nursing Yeomanry), which helped shield the actual activity of members as almost no one was aware of the SOE and its purpose;  Wanbourough Manor where the initial training of F section operatives took place;  Beaulieu Manor - the agents "finishing school"; the Prosper network:  and Colonel Maurice Buckmaster, the leader of the French Section of SOE.

Not so good:  the frame story was predictable and the characters were thin.  The cover is attractive, but doesn't match the time period.  The title doesn't have any connection other than the fact that Constance's code name was Lavender.  Even the war story about Constance had a sense of lacking something; however, almost everything Riley mentions concerning the SOE seems accurate.  That alone was worth it. 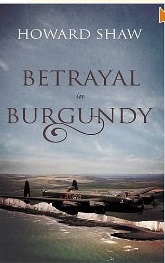 Betrayal in Burgundy by Howard Shaw was, in that neatly coincidental way, the next book I read that featured the SOE.  It is also, by far the better book if you are looking for characters, plot, and realism.


The frame:  An old woman and her son visit a cemetery in Burgundy.  They look at the markers for the airmen who were shot down.  She asks if he notices the difference in the stone for James Chalmers. The frame is very brief at beginning and end.  The heart of the story lies within the rest of the book, as the woman tells the story of crew and pilot and the part they played in the war.

Jamie Chalmers is twenty-three, and an RAF bomber pilot    Shot down over France, he is the only one of his crew to survive and is lucky enough to be rescued by a group that has helped other airmen in his position.  He grieves for his crew and for the woman he has left behind in England who must think him dead.  After a lengthy recovery, Jamie agrees to aid in a group who want to do whatever they can to throw a wrench in the Nazi occupying forces.

Along with another Brit, an SOE wireless operator who evaded capture,  Jamie works with the small group of Frenchmen who are not formally associated with any Resistance group, but who feel the need to make a difference.

From the scenes in Britain where the young RAF pilots fly by night over Germany, no return trip guaranteed, to the scenes in Burgundy where the courageous stand up and risk their lives in a different kind of war, Howard Shaw brings history to life in an absorbing and believable tale of all those men and women who were willing to risk everything to stop Germany.


How dangerous was the life of an RAF airman?

'The Air Ministry was able to compile the following figures up to 31 May 1947:
Killed in action or died while prisoners of war 47,268
Killed in flying or ground accidents 8,195
Killed in ground-battle action 37
Total fatal casualties to aircrew 55,500

Prisoners of war, including many wounded 9,838
Wounded in aircraft which returned from operations 4,200
Wounded in flying or ground accidents in U. K. 4,203
Total wounded, other than prisoners of war 8,403
Total aircrew casualties 73,741'

from RAF Bomber Command Losses of the Second World War

Taking an example of 100 airmen:

55 killed on operations or died as result of wounds
3 injured (in varying levels of severity) on operations or active service
13 taken prisoner of war (some injured)
2 shot down and evaded capture
27 survived a tour of operations.