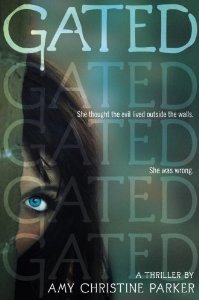 Gated  by Amy Christine Parker is a YA novel.

Do the gates keep the unchosen out or the chosen in?

In Mandrodage Meadows, life seems perfect. The members of this isolated suburban community have thrived under Pioneer, the charismatic leader who saved them from their sad, damaged lives. Lyla Hamilton and her parents are original members of his flock. They moved here following the 9/11 terrorist attacks, looking to escape the evil in the world. Now seventeen, Lyla knows certain facts are not to be questioned...

I'm not sure exactly where this one fits in a genre, sort of pre-dystopian, perhaps.  Or YA mystery?  Or survivalist/cult community?

It is an interesting look at the power of a charismatic individual to influence and control people who are intelligent and educated, but willing to surrender themselves and their families to another's authority.

Lyla, having spent most of her life absorbing the communities values, still has a tendency to question certain strictures.  She loves her friends and her community, but while willing to follow most rules and regulations, she knows that something about her view of life differs from that of her friends.

This novel should appeal to its intended audience and presents a compelling examination of some of the methods/techniques/procedures  involved in the manipulation of others and in cult ideology. 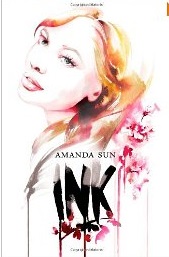 Ink. When Katie Greene's mother dies, she ends up in Japan living with her aunt.  Talk bout a fish out of water.  The language and culture would be difficult for anyone, but for an adolescent still mourning the loss of a parent, finding herself in a new school and learning how to fit into a world that is foreign in so many aspects...well, difficult is an understatement.

She does find herself with two helpful friends, Yuki and Tamaka, but still struggles with so many of the cultural anomalies.  Then she meets Tomohiro, and initially, has the kind of push/pull emotions that often occur in relationships.  Is Tomo an insensitive jerk, albeit a very attractive one, or is there more to him?

One attribute that both fascinates and frightens Katie, is Tomo's art--his drawings come alive.  As the relationship grows, Katie realizes that Tomo's "living" art has definite malevolent intentions.   Tomo has been wrestling with this aspect of his art for years before meeting Katie, but he begins to realize that Katie has a powerfully vivifying effect on his art, and although he struggles to control his drawings, he is fearful of their growing potency and independence.

An unusual and promising premise, the book also gives insight into the many differences in customs and conventions that Katie faces as she settles into her new life in Japan.  The mythology is also interesting, although adapted to the narrative.

While not flawless, Amanda Sun's debut novel is a fine beginning, and despite a weakness in the conclusion, I look forward to the next installment.