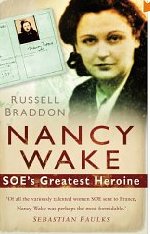 Nancy Wake was a true heroine of WWII, an SOE operative who survived when very few did.  Born in New Zealand, Wake was working as a journalist in France in the 1930's. She met the very wealthy Henri Fiocca in 1937; they married in 1939.

Her marriage to one of the leading French industrialists provided Nancy with a life of leisure and luxury.  When the Germans occupied France, however, Wake abandoned the pampered life and  became a courier for the French Resistance.  Known as the White Mouse, Wake was active in Ian Garrow's escape network and by 1943, she was "the" most wanted person by the Gestapo with a 5 million franc reward on offer. 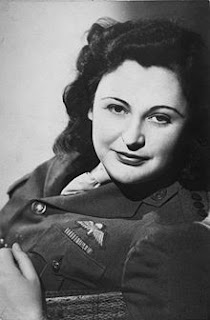 Eventually arrested in Toulouse, the Germans failed to realize that she was the White Mouse, and a friend was able to get her released after four days.  Her attempts to leave France were aborted time after time until on her sixth attempt, she was able to cross the Pyrenees and escape to England.

Recruited by the SOE, Wake trained briefly and then parachuted back into France in April 1944.  As a liaison between the French Maquis group led by Captain Henri Tardivat, Wake proceeded to work on tightening security, planning and organizing the drops of arms and equipment, allocating them to various groups, helping recruit and organize, and in many instances leading attacks against the Gestapo or installations targeted by London.

When one of her wireless operators had to destroy his codes to keep them out of Gestapo hands--I've just finished Between Silk and Cyanide by Leo Marks, who discusses the problem and ramification of lost codes--, Nancy rode a bicycle 500 miles through occupied areas to get replacements.

Although I was not totally satisfied with the style of the book, it did improve after the author got around to the war years.  Nancy Wake's story is a remarkable one, and I intend to read more on this subject.

Fiction works concerning the SOE that I've recently read have fueled my interest.
The Lavender Garden and Betrayal in Burgundy reviews.