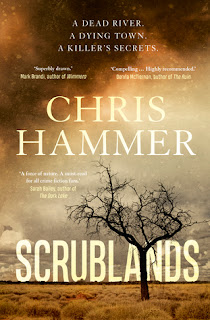 Scrublands will be on my list of favorites next year!

After a traumatic event in Gaza, reporter Martin Scarsden is sent to Riversend, a small country town in Australia devastated by a long drought.  A year earlier, a charismatic young Anglican priest had opened fire on the church steps--killing five men.  Martin's assignment is to write about the the effects on the town a year later.

The question of "why" reverberates--why did Byron Swift shoot down the five men before being killed himself by his friend Constable Robbie Haus-Jones?  Surprised by the response of various town members who still seem to admire and respect the young priest,  Martin is perplexed.

The owner of the local bookshop urges Martin to investigate the why.  Why a popular and beloved young man committed such a violent and senseless crime.  A simple assignment is thereby turned on its head as Martin's own curiosity pulls him deeper into the story.  Some things about the original story don't seem to fit, and Martin finds himself falling into a rabbit hole leading to more questions than answers.

Not wanting to give away too much, I found this one of the most fascinating and intricate novels I've read in a while.  The descriptions of the small town of Riversend and the scrublands make the setting an essential part of the story, the characters are complex, and as other developments occur, the question of how everything fits together becomes more acute.  The narrative keeps building, the puzzle more confounding, the action more intense.


Chris Hammer has worked as journalist for more than thirty years, alternating between covering federal politics and international affairs. Chris has worked as Senior Writer for The Age, Chief Political Correspondent for The Bulletin and Online Political Editor for Fairfax. As a roving international correspondent for SBS TV’s Dateline program, he reported from more than thirty countries across six continents.
Chris is the author of two successful and well-received non-fiction books, published by Melbourne University Press: The River: A Journey through the Murray-Darling Basin and The Coast: A Journey along Australia’s Eastern Shores. The River was shortlisted for the 2010 Walkley Book Award and won the ACT Book of the Year in 2011. The book recounts Chris’ travels through the Australian bush during 2008 and 2009, from Queensland to South Australia, at the height of the worst drought in Australian history. It’s those travels and the people he met that provided the inspiration, and inform the setting, for Chris’s first work of fiction, Scrublands. (source)
A stunning first novel and highly recommended.