The Traffickers by W.E.B. Griffin and William E. Butterworth 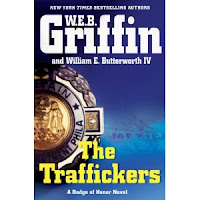 The Traffickers is not worth wasting much time on.  One of the librarians was shelving it on the new book shelf and mentioned that Griffin's books were really popular, but she had not read any.  I decided to try it.

I can't think of anything positive to say about it.  The worst thing was the cartoonish aspect of what was supposed to be a serious book about the effects of drug trafficking.  The hero is 27 and during his brief stay on the police force has had 3 or 4 "righeous" shootings.  Since most policeman can retire without having killed a single suspect, one must wonder how the hell, this one kid manages to be in the wrong place at the right time so frequently.  And the email texts to his "love at first sight" new girlfriend of about 24 hours are truly gag-worthy.