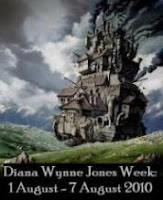 The other book I read for Jenny's Diana Wynne Jones Week.  Also part of the Chronicles of Chrestomanci and again, a stand-alone story tied to the series by the appearance of Chrestomanci, who once more must find a way to keep magic in balance.

It begins with students in class 6B writing in their journals.  This is one of the best sections of the book as the students reveal a great deal about themselves as they write.  When their teacher discovers and reads a note, all of the students are aware and curious.  Mr. Crossley, however, looks quite worried...and well he should be as the anonymous accuses someone in the class of being a witch.

In this parallel universe, witches exist and are burned at the stake.  In fact, Larwood House is a school for witch orphans.  The threat is serious, but Mr. Crossley doesn't know if it is a genuine accusation or a prank.

The problems young people have with appearance, cliques, bullies, and popularity are all here in this boarding school, mostly described through the eyes of Charles and Nan.  In addition to all of the above problems, who will be exposed as a witch?

What will the Inquisitor discover when he arrives at the school?