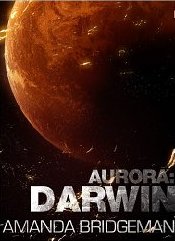 Aurora: Darwin is Bridgeman's debut novel and the first in a projected series.

When Captain Saul Harris is summoned from leave and given a new mission, he is already a little uneasy.  He and his crew are to visit a black ops space station with communication problems and determine if that is all that is wrong. Harris and his crew are not usually sent on minor assignments involving communications. The details of the mission leave a lot of questions unanswered and Captain Harris a little concerned about all that is not being said.  He is being deliberately kept in the dark about the situation, and to add to his discomfort, he is ordered to take on three new crew members--women.

Corporal Carrie Welles is one of the women--thrilled to have her first opportunity on space duty. She is delighted to be included on the mission and eager to depart, but Welles and the other two women are not going to be easily accepted as part of the crew.

On arriving at their destination,  Captain Harris' uneasiness increases.  Although the premise of the mission is simple, the dark station gives him pause, making him especially cautious.

"The lights are off.  But somebody is at home."

Fast-paced and exciting, suspense builds as the crew fights something they never expected.  The initial reservations of the men concerning the women as part of their crew lessens, and a sense of camaraderie and mutual dependence develops.  They must work together to survive.

The lack of military discipline, especially on the part of Carrie and a couple of soldiers toward the end bothered me, but the novel was a fast and enjoyable read.

An interesting debut novel by Amanda Bridgeman...with more to come.