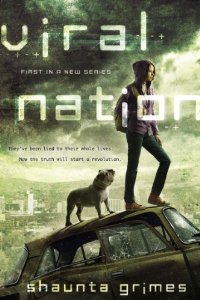 Viral Nation  is a YA dystopian novel that envisions the world after a pandemic, in this case a virus that has killed off most of the population.

Have you noticed how many dystopian novels are being written?   I've always enjoyed dystopian, post-apocalyptic novels, but the number of novels about societies attempting to recover after some cataclysmic upheaval in society and infrastructure has certainly increased.  I suppose it tells us something about our subconscious fears concerning infectious/contagious diseases, climate change, terrorism.

The virus that takes the majority of the population is one that works quickly, and a vaccine is discovered just in time to save enough of the remaining population to allow them to gather together and try to start over.

Viral Nation begins with the  birth of Clover, the protagonist.  Clover, her brother West, and her father received the vaccine and survived.  Then the book skips the parts about what to do about the millions of bodies and reorganization efforts, moving instead to  a sixteen-year-old Clover's admission to the Waverly-Stead Academy.  Clover is brilliant, but she is autistic in the high functioning range (Asperger's), and her quirks are many, making her an easy target.  West, however, does his best for Clover in the absence of their father, who has taken a position that has him living in a dorm.

When Clover's admission to the Academy is rescinded, she is sent instead to become a Time Mariner.  (I always have trouble with time-travel novels which never quite work for me, but time travel is an important part of this novel.)

Clover and West are likable and get the most effort at characterization.  Most of the minor characters are thin, whether good or evil, not exactly mere stereotypes, just not very fleshed out.