Claws of the Cat by Susan Spann 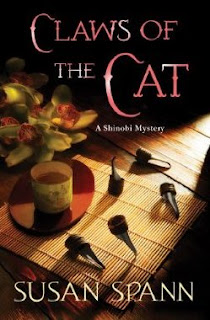 Claws of the Cat  is set in 16th century Japan and features Hiro, a Ninja detective, and Father Mateo, a Portuguese Catholic  priest.  It is the first in a new series, and I look forward to more.

Hiro has been sworn to protect Father Mateo, who is not always familiar with cultural norms and occasionally makes egregious social errors.

A young entertainer at a local teahouse requests Father Mateo's aid when she is discovered beside the body of a murdered samurai.   Hiro doesn't want to get involved, but Father Mateo's attempts to aid the young woman end up with the pair required to find the real murderer within three days, or the young woman, Father Mateo, and Hiro will all be subject to the revenge of the dead man's son.

An atmospheric mystery with plenty of suspects, intriguing glimpses of Japanese culture, and interesting, likable protagonists.

Do you have a favorite Asian mystery/detective series?

Net Galley/St. Martin's Press/Minotaur Books.  Will be released in July.